African dwarf frogs are some of the most popular aquatic pets at the moment. Despite their popularity, most amateur aquarists don’t put much thought into what to feed these pets or what the differences between the variety of food options are.

Yes! They’re peaceful and low-maintenance, but they also have nutritional needs that we need to understand and meet. So, if you’re interested in learning more about the best African dwarf frog food, continue reading.

The Omega One Frog & Tadpole Pellets are by far the best choice of food for your African dwarf frog. 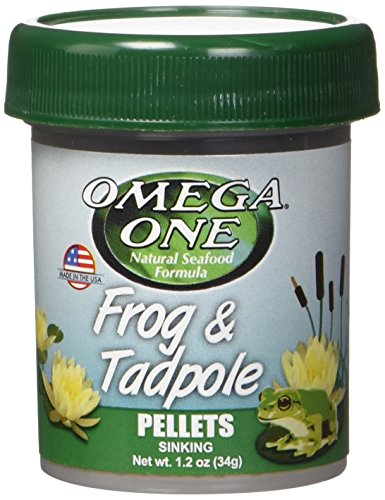 What Do African Dwarf Frogs Eat in the Wild?

African dwarf frogs that live in their natural habitat in Equatorial Africa eat a variety of things that they find underwater. As omnivores, they can survive on plants, but they prefer meat, which has the highest nutritional value and gives them exactly what they need: lots of protein.

Since they don’t have teeth, they swallow their food whole. That’s also why they can only eat very small meaty foods. So, you’ll notice that they love to eat insects and their larvae. In addition, they eat all kinds of small crustaceans, many worm species, and a ton of small fish species.

What Should You Feed Your African Dwarf Frog in the Aquarium?

Regardless of what African dwarf frogs eat in the wild, aquarists need to know what they should feed them in aquariums.

First things first, commercially prepared pellets, such as sinking fish pellets, should be their staple diet. They provide the frogs with nutrients in a stable and concentrated form, giving them the energy they need more efficiently than other types of food.

So, if you pick high-quality fish food pellets, you’re doing your African dwarf frog a favor. Not to mention they reduce the amount of food waste in the aquarium, which means there will be less cleaning for you to do.

Another type of food that should be a part of your frog’s diet is frozen or freeze-dried bloodworms and brine shrimp. They make excellent treats and provide your aquatic friend with a lot of protein.

Remember to cut the frozen cubes into pieces and thaw them out until they reach the water temperature before feeding them to your frog.

I also recommend using live California black worms from time to time as a treat. I like them because they last longer than frozen treats and don’t rot and pollute the water. Instead, they live, as long as possible, to feed your frogs over and over.

A Varied Diet is Best

Most pet owners are guilty of becoming lazy at some point, which I understand to an extent. Hear me out.

We tend to find ourselves at a spot where we pick the food that’s most convenient for us and feed our pets nothing else. We can’t blame ourselves because pets can be difficult, and it’s not like frogs will speak and tell you they want something else.

That being said, you should spice things up from time to time. Feeding your frog a wide variety of foods provides more nutrients.

So, feed your frog good-quality sinking pellets as main meals and give it frozen or live treats every once in a while. This is not only beneficial for your frog but also less boring because a variety of food is always fun.

Here are my recommendations and reviews for the best African dwarf frog food currently on the market and what makes them the best.

Sinking pellets should make up the majority of your frog’s diet, and there’s no better option on the market than the Omega One Frog & Tadpole Pellets. If you’re looking for high-quality food to improve your amphibian friend’s health and growth, this is the one.

These pellets come with whole, fresh seafood as a source of marine proteins such as wild salmon, herring, shrimp, and halibut. As the name indicates, they’re also rich in omega 3 and 6 fatty acids, which are important for the long-term health of your amphibian friend.

Apart from proteins, these pellets are rich in many vitamins and nutrients, such as vitamin A, vitamin D3, vitamin E, vitamin B12, calcium, and more. I especially love that these pellets are low-fiber, so I don’t have to worry about causing my frog indigestion problems.

A common concern in feeding amphibians commercial food is whether it’s high in fat. One of my favorite things about Omega One pellets is that they’re low in starches and carbohydrates. So, not only are they healthier for my frog, but they also leave less waste for me to clean afterward.

Like any commercial food worth feeding your frog, it has a variety of marine proteins, such as krill meal, ﬁsh meal, blood meal, and more.

Plus, there are plenty of vitamins and minerals, including but not limited to beta carotene, vitamin A, vitamin D3, vitamin E, vitamin B12, folic acid, biotin, calcium, manganese, thiamine, and riboflavin. Of course, there’s a healthy amount of fats and carbohydrates, as well.

I also love how these pellets have probiotics, which help improve nutrient uptake, meaning that your aquatic friend will absorb all the nutrients better. Probiotics also strengthen the immune system and reduce waste.

One more thing to like is that these pellets lack low nutritional value fillers such as cornmeal and soy, so you can put your mind at rest that you’re feeding your lovely pet high-quality food with nothing unhealthy in the recipe. 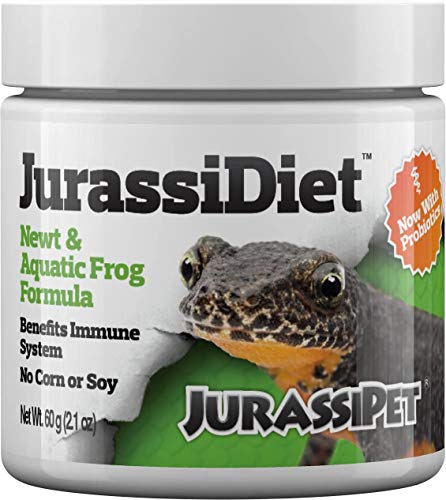 Do you find yourself constantly worrying about whether commercial food is small enough for your aquatic friend or not? Is your aquatic frog giving you a hard time not touching any food? In that case, I recommend the soft Invert Aquatics Frog Bites Sinking Pellets.

These frog bites are rich in protein, which is essential for your frog’s growth and strength. Its marine proteins include fish meal, squid meal, and shrimp meal. Your amphibian companion will definitely benefit from these moist, protein-focused pellets, as no bite would go to waste.

Proteins aren’t the only nutrients that these quick-sinking pellets have to offer. They’re abundant in vitamins and minerals, such as vitamin A, vitamin C, vitamin D3, vitamin E, thiamine, biotin, folic acid, manganese, zinc, and more. Not to mention the soft texture of the pellets will definitely get your frog to finish its meal in no time. 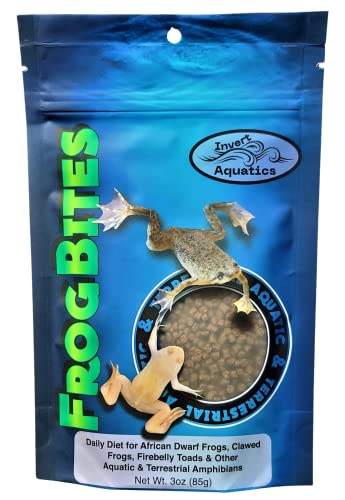 Just like there are certain foods to focus on, there are also foods that you should skip altogether. They’re usually advertised with overly sugar-coated language, but the ingredient list tells a different story.

Try to steer clear of foods that only get their protein from fish because they tend to be on the lower end of ingredients. Instead, opt for foods with more than one protein source, as they are more nutritious and beneficial to your frog.

Plus, there are certain popular frog foods that I think should be avoided, despite their popularity and hype, such as cheap sinking pellets.

One of the most harmful frog foods on the market is the Zoo Med Aquatic Frog and Tadpole Food. It disintegrates too fast, meaning that it doesn’t give slow-eating frogs the time to even eat. It also turns the tank cloudy because of its low-quality ingredients, which pollute the water.

Another example of low-quality foods is the Cobalt Frog & Tadpole Minis. They have only one source of protein, and the rest of the ingredients are nothing but low-quality fillers that you shouldn’t fatten your frog with. I don’t recommend that at all. It’s definitely better to invest in higher-quality food.

TetraFauna ReptoMin Select-A-Food is also another proof that just because an item is affordable doesn’t mean we should buy it. Like the Cobalt Minis, it has one source of protein and a questionably long list of fillers that will do more harm than good.

If you want something cheap to give your frog from time to time, go for frozen or live treats instead.

Which Food Is Best For ADF?

The Omega One Frog & Tadpole Pellets are by far the best choice. For starters, these pellets are abundant in high-quality ingredients, including proteins from different marine sources, such as salmon, shrimp, and halibut.

Also, they have an excellent variety of essential vitamins and an impressive selection of minerals that will improve your frog’s health.

While other commercial pellets are packed with preservatives, the Omega One managed to keep it pretty natural. Even the pigments are from natural sources!

I also like the fact that they’re low in fiber and fat, which equates to a healthier and cleaner diet for my aquatic friend and a much easier tank cleanup for me.