It may seem obvious that anything capable of living and breathing must also be capable of feeling pain.

But, when it comes to fish, this is still a hotly debated topic and many people find themselves asking, “do fish feel pain?”

Let’s explore this question together and see how a fish’s system of detecting and responding to pain compares to our own.

As unpleasant as it may feel, pain is actually really important. It lets us know when we are hurt so that we can protect the injured area and prevent further damage. It is even favoured by natural selection, as an animal that can minimise the amount of harm it causes itself is more likely to recover and survive.

But what actually is pain?

When a body part is damaged, special receptors in the skin are stimulated, which tell the body that something is harming it in that particular area. A signal relaying this information then travels through the nerves to the spinal cord.

This triggers a reflex response in order to get away from the source of the damage. All of this happens automatically and is known as nociception, the instinctive part of the pain response.

But it is only once the signal reaches the brain that the pain is actually felt. This is known as pain perception. It can take as long as 2 seconds for pain to finally register and be felt, depending on the type of damage that has been done.

On top of that, pain is relative. What may be agonising for you could feel like a mere pinch to someone else. And the same is true of animals. The extent to which many animals, including fish, can experience and perceive pain is widely debated, even today.

Fish definitely have nociception, and we’ll look at that in a moment, but do they have pain perception too?

This is widely debated and, even now, people argue against a fish’s ability to feel pain. A survey of North American anglers found that only slightly more believed that fish feel pain than believed they don’t.

Fish have the same basic body plan as mammals, such as ourselves. They have a backbone, senses, and even a nervous system stemming from a brain. So it should stand to reason that they experience pain in the same way a mammal would.

But, due to the reflexive nociception, it is possible that an animal will react to a negative stimulus, such as damage to the skin, without any sensation of pain. To truly know whether or not fish feel pain, we need to know if it is merely their body reacting to the stimulus or if their brain is involved as well.

The American Veterinary Medical Association argues for the latter and states,

“Suggestions that fish responses to pain merely represent simple reflexes have been refuted by studies demonstrating forebrain and midbrain electrical activity in response to stimulation and differing with type of nociceptor stimulation.”

In their view, fish should receive the same consideration as any other vertebrate animal when it comes to pain and pain relief.

It is true that fish show all the signs of feeling pain, both in terms of their body’s response and their own behavioural response. They are capable of learning to avoid painful stimuli and of seeking pain relief when they are harmed. The evidence for fish feeling pain is really piling up.

Evidence of Pain in Fish

There have been a variety of studies over the years on whether or not fish feel pain. They show examples of both the unconscious pain response and the conscious one in several different species of fish.

In 2003, Victoria Braithwait and her colleagues were able to prove that trout have the fibres necessary for sending pain signals from nerves to the spinal cord. They specifically looked around the mouth area, which, as you can imagine, is the area most affected when the fish are hooked by anglers. Trout also possess several nociceptors, all of which respond to harmful stimuli.

Another study, this one by Lynne Sneddon, provided more evidence of pain in fish. She put a group of zebrafish in a tank with two chambers.

One chamber was enriched with rocks and vegetation and the other barren and the fish could move freely between the two. As you can imagine, most stayed in the enriched side where they had plenty of places to hide.

She then injected each fish with either saline, which was harmless, or acid. At first, all the zebrafish stayed in the enriched chamber, until she dissolved a painkiller into the barren one.

Only the fish that had been injected with acid moved into this chamber and they stayed there until they had recovered. This showed that, not only did the fish feel pain, but they actively sought relief from it.

So the evidence of fish feeling pain is pretty strong. But there is also evidence that they warn others of it.

In 1938, Karl von Frisch found that some species of fish produce an alarm chemical in the presence of danger. When he accidentally injured one of his minnows, he noticed that other fish in the tank began darting around and freezing in place, typical predator avoidance behaviour.

He began to experiment and found that injured fish release a pheromone to act as a warning. Detection of this pheromone causes agitation in the other fish as they become aware that there is a threat nearby.

The cells that release schreckstoff are in the skin and are incredibly fragile. When they rupture, they release the chemical. This signals to the other fish in the population and allows them to stay out of harm’s way. In other words, they use it to avoid pain.

But sometimes it is better to face the risk of pain.

No Pain, No Gain

One of the main arguments against fish feeling pain comes from anglers. They have seen firsthand that the same fish may be hooked several times, with seemingly no concern for the damage they are doing to themselves.

So, if fish do feel pain, why would they keep coming back for more knowing what is waiting for them?

To put it simply, the reward is worth the risk.

Food can be hard to come by in the wild so, when it is offered up freely by anglers, a fish may be willing to face the pain, especially if it has been hooked before and knows it will survive the ordeal.

How Does a Fish’s Pain Compare to Ours?

Imagine you are boiling a pan of water with a poorly insulated lid. You pick up the lid to check on the water but drop it immediately without really having to think about it.

You have been burned.

Receptors in the skin on your hand will have been triggered, sending electrical impulses through the nerves and triggering the reflex response. A signal is passed to the muscles in your hand, which is what caused you to let go of the pot lid, the source of the pain. At this point, you may pull your hand back and guard it as the pain starts to register.

In the future, you will likely remember this in similar situations and act with more caution. The pain has served its purpose.

Pain acts as both a great teacher and a great motivator. And the same is true of many animals. Mammals, birds, and fish all respond to injury in a similar way to us.

Think back to the injected zebrafish. During the experiment, before pain relief was administered, the acid injected fish were seen rubbing against tank walls to relieve the irritation. In a similar way, when we accidentally get vinegar or lemon juice in a cut, our first response is often to press or rub the area to try and stop the sting.

Science seems to back up the idea that yes, fish do feel pain. Like us, they respond on reflex through nociception and consciously through their behavior. Given that these same mechanisms are found in all vertebrates, chances are they evolved in fish first.

A fish’s motivations are often quite similar to ours: avoid harm, protect themselves, and keep on living another day. Why wouldn’t they feel pain too? 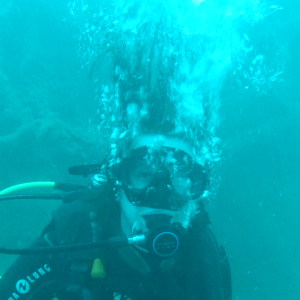 Types of Discus Fish – Which One Will You Choose?

Types Of Plecostomus – Which One Is Right For Your Aquarium?