African dwarf frogs first became popular pets in the 1970s and since then have continued to be a popular amphibian pet choice.

That’s due to their low maintenance compared to other amphibians, their singing/humming, and highly energetic activity, all of which are very appealing to any pet owner.

Carib Sea Super Naturals Crystal River Sand is the best of sands. It looks like natural sand you’d find in a river.

For a planted tank, Seachem Flourite is definitely the best. It won’t change the pH and doesn’t need to be replaced every few years.

If you want gravel in your tank, the CaribSea Sri Lanka Gravel is the best choice because it has no coatings; it’s completely natural.

The African dwarf frog (ADF) originated in the countries of western Africa, near the equator. It’s found starting from the north in Nigeria, followed by Cameron and Gabon all the way to the Republic of the Congo in the south.

ADFs spend their whole lives in the water of these areas, only coming up occasionally for a breath. Since they are not great swimmers, they usually reside in constant or very slow-moving aquatic sources such as freshwater bogs, ponds, streams, and shallow rivers. During the wet season, they also live in the flooded areas of lowland forests, near a steady water source.

They usually remain near the river bed, camouflaging themselves with the mud and fallen leaves to hide from bigger predators. Tanks/aquariums should mimic and maintain the ADFs’ natural environment to promote their health and longevity.

Inert Substrate Is the Best Choice

Substrates are essential when it comes to raising any creature in an aquarium. A substrate is a material that lines the aquarium floor and in which plants take root and grow underwater.

However, substrates can change the parameters of the water, making it unsuitable for your tank resident. They can change the water’s pH, KH, and precipitation, among other things.

Inert substrates are considered the best option because they’re neutral, almost undegradable, and chemically inert; thus, they don’t change any water parameters. They include either sand, gravel, or baked clay, all of which come in numerous sizes and colors.

When it comes to raising an ADF, sand, and gravel are both considered appropriate tank substrates. Many owners fear that the frog may end up swallowing sand or gravel when scavenging for its food. Subsequently, the sand or gravel particles will get impacted in the frog’s digestive tract, harming your pet frog and damaging its health.

Some people prefer sand as they think the frog will just pass it after its ingestion due to its small size. Others prefer gravel as its larger size and weight prevent the frog from accidentally swallowing it, with the added benefit of its smoothness that’s quite gentle on the frog’s fragile skin.

However, plenty of ADF owners have raised them on either or both and have encountered no such problems. In the end, it’s all a matter of personal choice and what you find accessible, easier to manage, and more esthetically pleasing. If sand is what you like, then go for it, and if gravel is more to your liking, knock yourself and have no worries about your little amphibian.

This sand substrate is a good pick. It resembles natural sand in color and texture. It’s also neither dyed nor coated and has a neutral pH making it a good fit as an ADF substrate.

It’s light in weight with a good particle size, which minimizes detritus buildup and allows proper vacuuming where negligible amounts of sand get sucked out.

As with all inert substrates, the innate nutrients are locked in the sand’s crystal lattice, so no sufficient nutrients are available for plant growth. Therefore, artificial plants are better used with this sand. If you’re bent on having a planted tank with natural plants, consider using water column dosing or buying a root tab fertilizer, although it might discolor the sand. 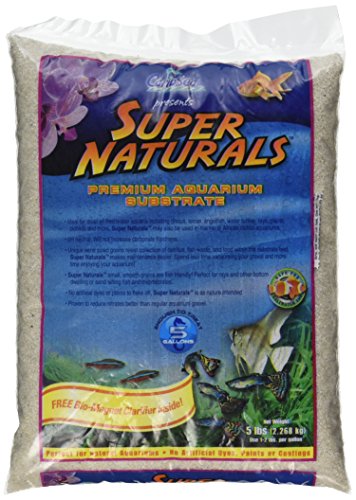 The CaribSea Super Natural Moonlight Sand is an almost pure white, shiny sand that gives a beautiful contrast with your tank’s inhabitants, from frogs to plants.

It has a neutral pH and is very easily cleaned and maintained. It has extremely fine and smooth particles, making it a good choice for an ADF’s sensitive skin.

Some people have complained about the cloudiness it causes when placed in a tank with strong currents as the extremely fine particles don’t settle down. However, since ADFs need slow to no currents, it works out just fine. The only time you might see a little haze is when the frogs are scavenging for food near the bottom.

Just bear in mind that it’s better to use a Hydro Sponge filter with this type of sand. That’s because a regular Hang-on-Back filter would need constant replacing once the fine sand grains abrade the filter’s motor or impeller. 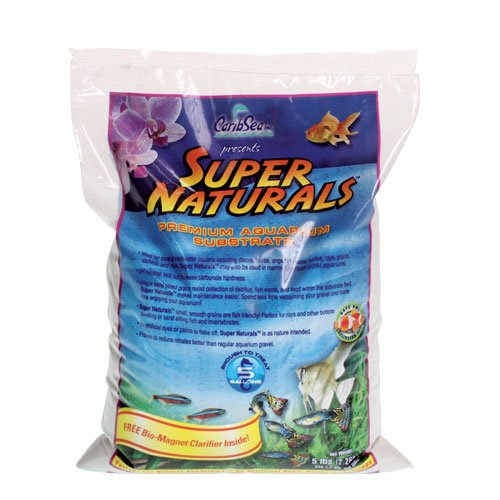 It’s easy to clean beforehand and can be easily vacuumed without being siphoned off. You also don’t need to keep replacing your filter like with other sands since the grains are too big to impede it.

Its weight holds plants in their place but still allows the roots to grow and expand when properly paired with an external source of nutrition. 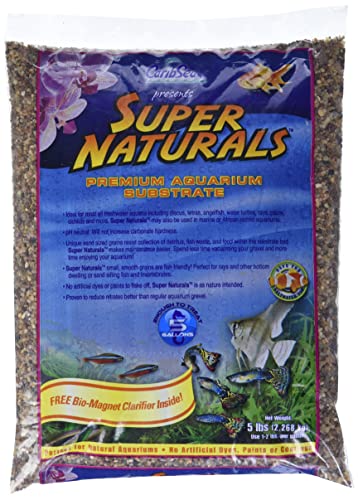 The Seachem Flourite Black Sand Substrate is a natural, inert, black/charcoal grey sand, which isn’t coated nor dyed like other black sands. It has a good texture and weight that allow for plant growth, making it ideal for planted tanks. That’s especially because it doesn’t change the water’s pH the way some other planted substrates do.

Another perk is that it doesn’t need to be replaced every few years like aquasoil or other substrates since it’s completely inert.

Just make sure to thoroughly rinse it before placement in the tank to avoid any turbidity in the water. Throw out the wash water while it’s agitated so that the sediment on top -responsible for the tank cloudiness- is eliminated. 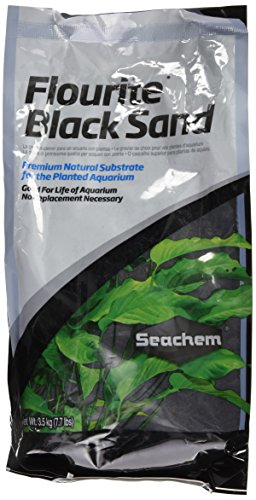 The Spectrastone Shallow Creek Gravel substrate consists of multicolored, natural-looking pebbles with a slight variance in grain size, ranging from 2 to 4 mm. The grains are smooth and rounded, with no sharp edges; thus, they don’t readily accumulate detritus and wastes, making them easy to keep clean with a gravel vacuum.

The gravel is covered with a non-toxic coating and appears to have a light tan or gold color when placed underwater. It’s inert, so it won’t alter the pH, allowing for a suitable aquatic environment for your plants, fish, and frogs. 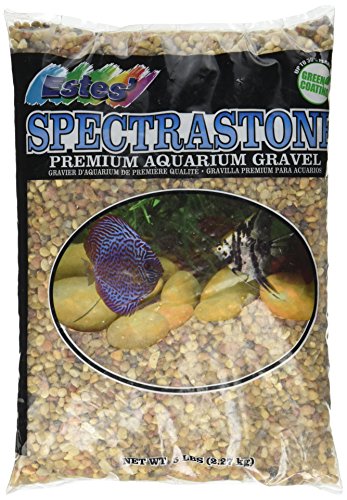 If you’re looking for a gravel substrate to make a good contrast in your tank to showcase its dwellers better, then the Spectrastone Special White Aquarium Gravel is the one for you. The grains are 3 to 8 mm in size and coated with a non-toxic white polymer, which showcases your tank to its fullest potential and gives it a sophisticated, elegant look.

It doesn’t alter the pH, so it’s appropriate for freshwater creatures and plants. Its only disadvantage is that algae growth is very apparent on the white gravel, and over time, the pebbles get discolored easily. 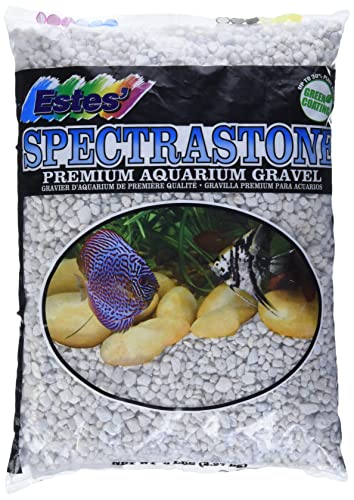 For completely natural gravel, the Carib Sea Sri Lanka Gravel is a top pick. It has no artificial dyes or paints that flake off and damage the filter or cause cloudiness. It has bright natural-colored stones, which vary in size from 3 to 5 mm.

Its grains resist the accumulation of detritus from food and frog/fish waste and prevent it from sinking to the very bottom, making it much easier to clean than other substrates. 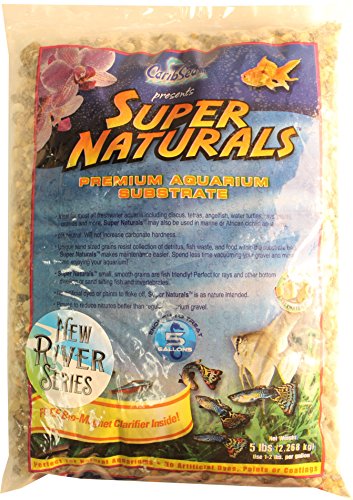 Which Is Best For African Dwarf Frogs?

Depending on your preferences and what kind of tank you want to keep, the best substrate varies among people. If you prefer sand, the Carib Sea Super Naturals Crystal River Sand is the best of sands. It looks like natural sand you’d find in a river.

For a planted tank, Seachem Flourite is definitely the best. This substrate won’t change the pH of your tank and doesn’t need to be replaced every few years like some other planted tank substrates.

If you want gravel in your tank, the CaribSea Sri Lanka Gravel is the best choice because it has no coatings; it’s completely natural.