The best aquarium air pumps are seen and not heard. There’s nothing worse than trying to enjoy your aquarium, and all you can hear is EERRRRRRRRR…

If you’ve ever owned a poorly made air pump, you’ll know what I mean.

So you don’t make that mistake, I purchased the Aquaculture, Eheim, Tetra Whisper, MillionAir, and SunSun air pumps and used a decibel reader to test which is the quietist. I then measured and compared the air volume and ran them on my own tanks to test for overall quality of use.

Here are the results to help you pick the best air pump for your aquarium.

How I Tested The Air Pumps For Sound & Quality

All of the pumps tested in this article are rated for tanks that are up to 60 gallons (227 liters) but each of these pumps come in larger or smaller sizes to accommodate different tank sizes.

For the air volume testing, we filled a large plastic tote with water.

This particular tote is normally just used as a dirty clothes hamper, but on this day, it served a higher purpose.

To test the volume of air coming from the pumps, we took an empty 2 liter soda bottle, put about half a liter of water in it and very carefully used the water line as a guide to mark the volume.

Then, we added exactly 1 liter of water and then used the new water line as a guide so that we could mark the bottle.

The bottle was then filled with water and capped. We flipped the bottle over, submerged the cap and the first quarter of the bottle in the tote. Then we took the cap off. Since the opened the bottle under water, the water in the rest of the bottle stayed in place, even above the water line.

All of these pumps have dual outputs, so we attached two pieces of standard airline hose to the outlets and then fed these tubes into the bottles.

We timed how long it took the air from each pump to disperse one liter of water in the bottle. Each air pump was tested twice and we used the average of these two times in our calculations.

There is some debate about what is the proper format for the air volume of an aquarium pump. Some say liters per hour, others like liters per minute, and yet others who prefer gallons per hour.

In each review, I’ll provide all three formats, but liters per minute worked best for the chart below.

As you can see, the Tetra Whisper air pump dominated the contest, pumping out almost twice as much air as some of its competitors.

Don’t get me wrong, a powerful pump that pushes through a lot of air is nice, but a noisy, rattling pump that just repetitively drones on in the background can push all the wrong buttons for me.

Every pump manufacturer claims their device is quiet and inconspicuous. But, they’re not too forthcoming with what they mean by that exactly.

So, we put this to the test by running the pumps in a quiet room with very little background noise. We placed pumps one at a time on a hard surface and placed the decibel meter next to each pump to capture the readings.

The more decibels the pump puts out, the noisier it is. The chart below shows how each pump stacked up in our head-to-head challenge.

They are listed from quietest to loudest:

As you can see, the Tetra Whisper filter went from the leader to dead last. Aquaculture was again high in the rankings, leading it to be my number one choice over the rest because of its combination of power and quiet running.

Below you’ll find my reviews and test results for different air pumps to help you pick the best one for you.

This little workhorse came out to be the overall winner. It’s not the most powerful, but it still packs a punch at over 5 LPM, and it puts out the lowest amount of noise out of the five.

There are no frills on the outer casing, it’s not much more than a plastic box that pumps out air. But, I’m more concerned with function than aesthetics when it comes to air pumps. 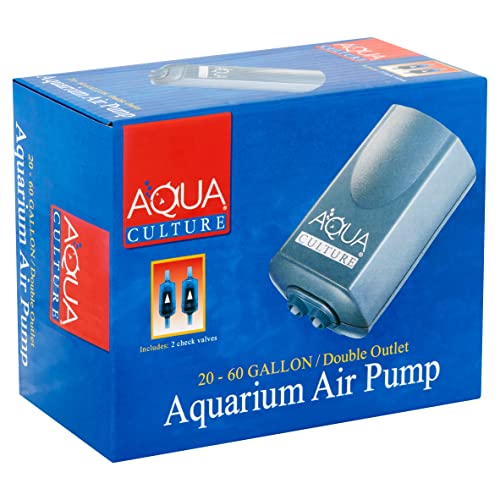 This Eheim air pump came in at a close second in the decibel testing. But, it was not nearly as powerful as the Aquaculture air pump.

Also, the pictures of this filter are a bit deceiving. They make it look as if this pump stands on end, but in reality, this pump sits on one of its broad sides, just like all the others. 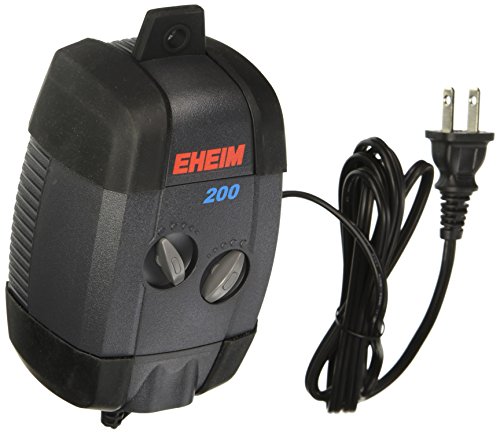 This Tetra air pump was able to pump out more air than any of its competitors. Unfortunately, it was also the loudest of all the pumps.

Supposedly, the unique shape of this air pump cuts down on noise, but that did not safeguard this pump from being the noisiest of the bunch.

I would say it puts out more of a dull roar than a whisper. 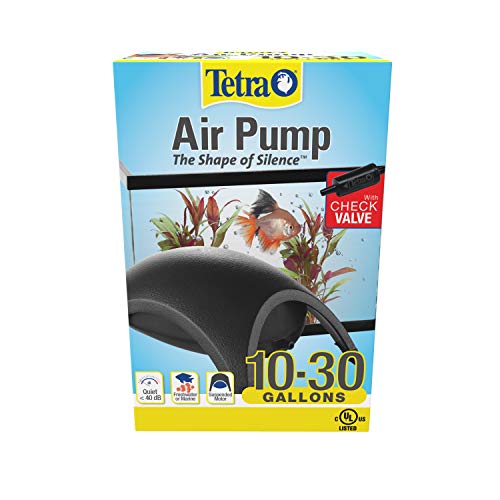 The Million Air pump was lackluster in both categories. I’ve used several of these pumps over the years, and thought that they would perform better. But, when I crunched the numbers this pump isn’t terrible, but it’s also not the greatest out there. 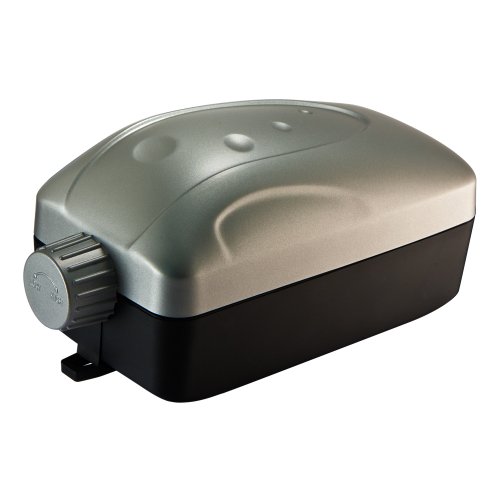 SunSun continues to try to make a name for themselves in the aquarium hobby. I usually find their products to be more middle of the road, but I had to mark off some serious points on this pump’s ratings. It put out the least amount of air and it was one of the noisier devices. 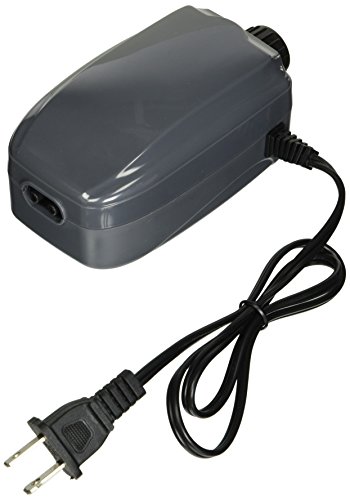 Which Is Aquarium Air Pump Is Best?

It would be my number one pick out of this bunch of five. I was able to run two huge airstones with this pump and I was impressed with the power it was able to display.

The Eheim was a close second when it came to noise levels, but it can’t move nearly as much air as the Aquaculture.

The Tetra Whisper air pump proved it can chug out a lot of air, but sadly, it also belches out a whole lot of noise along with it.

I had expected the Million Air to perform better, but I did have to give it a lower rating based on testing.

And finally, the SunSun was not a winner in either category and came in dead last.

All things considered, the Aquaculture blew the doors off the competition and won this head-to-head challenge with ease.

How to Correctly Setup Your Air Pump

Before you go check out some air pumps, I wanted to share with you some tips on how to setup your air pump.

So you can avoid unwanted incidents. Once you have purchased your air pump, you will want to ensure that you install it right. If it’s located below your aquarium and the power goes out, it’s possible it will create a back siphon of water.

You don’t want that.

It will result in breaking your air pump and siphoning all the water in your aquarium onto the floor. There are two simple ways you can avoid this. Either install your air pump so it’s above your water line, or, use an inexpensive check value. This will work to stop your water siphoning through the line and into your air pump.

Benefits of Using an Air Pump

We know that air pumps aren’t 100% necessary. There are many aquarists who never use them and have great success.

But, there are still some benefits your tank will receive if you use a quality air pump. Let’s take a look at them…

The main purpose of an air pump is to help oxygenate the water in your aquarium. Some people believe this is due to the bubbles passing through the water, however, this has little effect.

It’s actually down to the extra surface movement which the bubbles create.

The more surface movement you have, the more contact your water has with the air. This results in more oxygen getting into your tank.

Having increased oxygen levels will benefit all aspects of your aquarium. Live plants, fish, and beneficial bacteria will thrive with higher oxygen levels.

This can be especially beneficial in the hot summer months.

As when your water heats up, it’s ability to hold oxygen decreases. Air pumps are good to add that extra that’s needed.

Water movement is vital to keeping a healthy aquarium. There’s many unseen processes that occur as the water in your tank circulates.

We know increased movement will help oxygenate your water, but, it will also help to:

You might just want to have bubbles in your tank, they can add extra aesthetic qualities. And they can be cool to look at! What’s best to remember, is that they can’t do any harm and fish tend to enjoy bubbles.

They love to play with them: riding the bubbles up, and then heading back down and do it again – it’s almost like a rollercoaster for them. Some even use them to massage themselves.

Having an air pump can only benefit your fish and aquarium.

Do You Really Need an Air Pump for Your Aquarium?

But, they can be very useful.

Adding airstones to your aquarium is a great way to help circulate the water in your aquarium. Dead spots with no water flow in the tank can have lower oxygen levels and allow blue-green algae to get a foothold.

But, the added water flow that you get from airstones can combat this, increasing both water circulation and gas exchange at the water’s surface.

Air pumps can also power some kinds of filtration, like sponge or corner filters.

A stream of air passes through a central tube, which creates suction that drags water along with the bubbles as they stream to the surface. This suction draws water through the sponge and other media, sucking up fish waste and detritus.

Beneficial bacteria in the media eat up harmful wastes like ammonia and nitrite, helping to process fish wastes and keep the aquarium water healthier.

Plus, streams of bubbles floating up to the surface of the water look pretty darn cool. I always like to have some sort of air feature in my tanks.