Comet goldfish (Carassius auratus) are a hardy species of fish whom is able to handle a wide variety of water conditions.

Active and fun to watch, caring for comet goldfish does come with some absolute musts.

In this guide, you’ll learn how to care for comet goldfish, set up your own aquarium, and provide them with an optimal diet for a long and healthy life.

Comet goldfish look fairly similar to their ancestor, the common goldfish, but with some differences.

Comets have a slightly slimmer, more sleek body type than common goldfish. And the most noticeable difference, comets have much larger, showier fins.

They have a large, flowing tail that really stands out compared to a common goldfish. A comet’s tail is usually the same length as its body.

The comet goldfish is not a naturally occurring species. Comet-tailed goldfish first appeared in the aquarium trade in the late 19th Century.

They were first bred by Hugo Mulertt, a government worker in Washington, D.C.

Murlett selectively bred common goldfish to create this special breed of goldfish that is slimmer and has a large, deeply forked, single tail.

The common goldfish was originally bred from the Prussion carp (Carassius gibelio).

How to Set Up a Comet Goldfish Tank

The most important thing to consider when it comes to comet goldfish is space. These fish are very large when they reach adulthood.

They can easily reach lengths of 12 inches (30 centimeters). Not only are they large, but they are also very active fish that puts off a lot of waste.

Comets swim almost constantly and so they need a large area to move around in.

I recommend keeping a single comet goldfish in a 75 gallon (284 liter) tank.

And if you want to keep a group, you need to add another 50 gallons (190 liters) per fish.

I know, that seems an awful lot of tank space for just a few fish, but they really do need that much room.

In fact, if at all possible, I would recommend keeping comets in a medium to large pond instead of an aquarium.

I’m not saying it’s impossible to keep them in a tank, I just think it’s easier to have them in a good sized pond outside instead of maintaining a massive tank in your living room that can only house three or four fish.

All species of goldfish get fairly large and need a lot of tank space and filtration. THERE IS NO SPECIES OF GOLDFISH THAT CAN SURVIVE LONG TERM IN A GOLDFISH BOWL. Please, keep goldfish in an appropriately sized tank with a filter.

Good filtration is absolutely critical when you’re keeping comet goldfish. You may want to look into getting a canister filter.

These active fish are eating machines that put out a huge amount of waste.

As that waste accumulates in the aquarium, it will break down and begin to put off ammonia (NH3). This is a major concern because ammonia is highly toxic.

All it takes is one part per million of ammonia in the water to stress and kill many kinds of fish.

Without filtration, fish waste would build up, putting out more and more ammonia, until the tank water became completely unlivable.

Filters help to pump water around the aquarium and keep it from becoming stagnant. On top of that, there are beneficial bacteria that grow in filters that help to detoxify wastes.

These bacteria eat up ammonia in the water column and transform it to nitrite (NO2 -1) and then to nitrate (NO3-).

Nitrate is much less toxic than ammonia or nitrite, so it can be allowed to build up in the tank between weekly water changes.

This transformation of fish wastes into less toxic byproducts is known as the Aquarium Nitrogen Cycle and is the most important concept in fish keeping. For more information about it, please see this article.

Comet goldfish prefer harder water with a pH over 7.0.

Comets, like all goldfish, are cold water fish that do not require a heater at room temperature.

This species does not require a particular kind of substrate. Comets will be fine with sand, gravel or a bare bottom tank, whichever you prefer.

Comet goldfish do not have any particular needs when it comes to lighting.

You can just choose whichever lights you prefer.

These fish will do best in a tank with large, open swimming areas. As I said before, they are very active swimmers that need a lot of room to move.

As long as there’s plenty of room to swim, you can add whatever decor strikes your fancy.

Make sure that there are no sharp edges on your tank decorations. Comet goldfish can easily snag their long flowy fins on sharp decor. This can damage the fins and leave the fish open to infection.

Comets appreciate live plants in their tank. But, they will devour tender plants and they like to dig in the substrate, which can uproot plants.

I would recommend using tough plants, like Java fern and anubias, that can be attached to rocks and decor. That way, they can’t be dug up by a marauding goldfish.

These plants can tolerate low light levels and also their leathery leaves don’t taste very good. So, hopefully, the comets will mostly leave these plants alone.

Or, if you really don’t feel like dealing with any kind of hassle, you can decorate the tank with some beautiful silk plants.

Goldfish are omnivores that will eat just about anything that isn’t nailed down.

It’s best to recreate this same kind of variety in an aquarium setting as well.

Providing a varied diet helps ensure that your goldfish get all of the nutrients they need to be happy and healthy, which also improves their color.

I would recommend using a prepared food, like Omega One Goldfish Pellets. I like that these pellets quickly sink after they’re added to the water.

Comets and other goldfish can become bloated if they swallow too much air while they’re feeding at the surface. Giving them a sinking food can help avoid this.

You can also add in something like Northfin Goldfish food that’s packed with kelp and high quality ingredients like whole krill and spirulina algae.

They will also appreciate the occasional blanched veggies, like peas or small chunks of zucchini.

Plant-based foods also provide much needed fiber that is essential for a goldfish’s digestion. 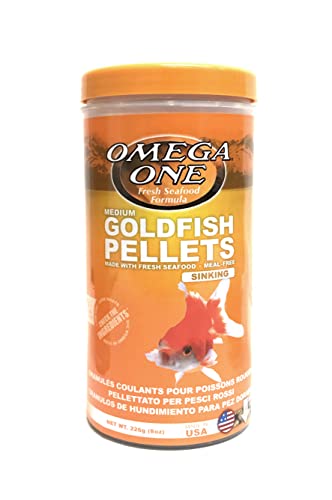 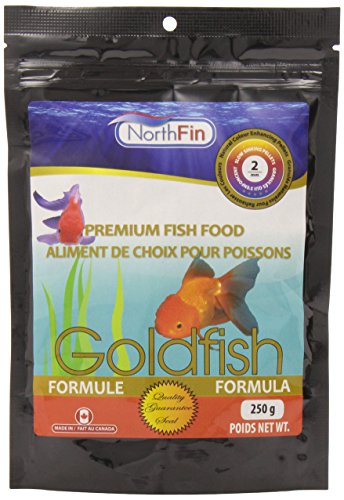 Breeding comet goldfish in an aquarium can be somewhat challenging.

You will need an additional breeding tank so that you can separate the parents from the fertilized eggs. I would recommend a 100 gallon (379 liter) tank with lots of fake plants.

You’ll need to mimic a winter and spring cycle to trigger the fish to spawn. The temperature in the tank should be lowered to 58°F (14°C) for at least a month. You may need to invest in an aquarium chiller to lower the water temperature.

The light cycle in the tank should also be reduced to 8 hours a day.

The temperature should then be slowly increased until it reaches 72°F (22°C) and the light should be increased to 12 hours a day.

The male comets should then start to bump into the females, trying to get them to release eggs.

As the female scatters her eggs on plants in the tank, the male will fertilize them.

Once they have stopped spawning, the adults should be removed to another tank, or else, they will devour all of the eggs.

The eggs will hatch 24-48 hours after spawning and the fry will become free swimming after another 24-48 hours.

The tiny fish will do best on a commercially prepared liquid fry food until they are large enough for baby brine shrimp.

You are somewhat limited when it comes to tank mates for comet goldfish.

Many of the fish that are commonly found in the aquarium trade are tropical fish that need water temperatures that are far too hot for goldfish to live in.

Another concern is that comets grow very large and swim very fast. They are not aggressive fish, but they will eat other fish that are small enough to fit in their mouths.

The safest tank mates for comet goldfish, frankly, are other comet goldfish. Common goldfish are also a good choice since they are so similar to comets.

But, fancy goldfish are much too slow and clumsy to keep up with comets. The comets will swoop in and eat all the food before the fancy goldfish have time to eat.

Is a Comet Goldfish Right for You?

The biggest consideration about whether or not you can keep this species is space. They require a very large tank to truly thrive.

Do not believe anyone who says that fish just grow to the size the tank allows. Keeping a fish in a tank that is too small stunts their growth and usually greatly decreases their lifespan.

These fish need to be in at least a 75 gallon tank. I would recommend that this species be kept in a large pond instead of in an aquarium.

The fish will greatly appreciate the space to roam around in a more natural environment.

If you have the space to keep comet goldfish, they are very hardy fish that can tolerate a wide variety of conditions. They are a very active fish that is really a joy to watch as they dart around looking for food.

I hope you find this information helpful.

I wish you and your fish all the best!