Diligent little algae eaters, Otocinclus are peaceful and would make an awesome addition to your planted aquarium.

They’re easy to look after, provide plenty of entertainment, and will keep your aquarium from being overrun by algae – as long as you keep them in the correct conditions.

And that’s what you’re about to learn in this Otocinclus care guide.

You’re going to learn how you can avoid the common mistakes which cause many hobbyists to lose their Otos in the first month.

And what you need to do to ensure your buddies live a long, happy and healthy life.

A genus of catfish in the family Loricariidae, Otocinclus are native to South America and can be found east of the Andes throughout the lowlands from northern Venezuela to northern Argentina.

Most active in the day, Otos swim in big shoals (or schools) and inhabit well-oxygenated, moderate to slow-flowing streams and small rivers.

Spending their time in the shallows and near the surface, they’ll cling to substrates using their mouth as a sucker and feeding on algae or aufwuchs stuck to roots, stones, macrophytes and broad-leaved grasses.

Super peaceful, if you house Oto’s properly they’ll show tons of activity and personality during the day.

Industrial workers, they’ll spend the majority of their time sucking away on rocks, leaves, or anything with algae growing on it.

My favorite is when they hang off the aquarium glass and you can see their suckermouth in full motion.

You may see your Oto rising to the surface for air because they have the ability to breathe the same air as you and me (could be a sign your aquarium water is lacking in oxygen).

This study showed they released air through their gills before surfacing, and when they returned to the bottom, they didn’t need to pump their buccal cavities. This suggests they absorb oxygen from the air when they surfaced.

What you’re looking for, is something that won’t directly or aggressively compete for food, is peaceful, and thrives in the same water parameters.

Large and/or aggressive fish will frighten your Otos – they might even eat them.

It doesn’t matter which species of Otocinclus you own, they all require the same water conditions – low stock density and pristine water – depending on your water source, you may want to use an RO system.

Keep nitrate levels between 0-20ppm (parts per million) and have no measurable ammonia or nitrite.

Stock your tank with plants (see more info below) and perform weekly 25-30% water changes to help keep your water as clean as possible.

Otocinclus are social fish, living in shoals of thousands in the wild. Because of this, you’ll need to keep at least 6 in your tank – 10-15 would be better.

Preferably in a 20-gallon tank, however, if you only want to own 6 Otos a 10-gallon tank will be okay.

Pro Tip: The bigger your tank, the easier it will be for you to maintain a healthy ecosystem.

We both know water quality is vital, soI recommend you use a canister filter with a GPH rating 4x the volume of your aquarium.

As well as a CO2 injector and test kits to keep track of the ammonia, nitrite, and nitrate levels in your aquarium.

Pre-soaked branches or bogwood and rounded stones will provide your Otos with areas to graze.

Be careful, make sure you avoid any objects with sharp surfaces.

Your Otos (and other fish in your tank) may damage themselves and create the ideal environment for disease to establish.

Your Otos will graze on algae from your plants, so I recommend you use slow-growing plants.

Fast-growing plants will often consume the carbon dioxide and dissolved nutrients before algae get a chance to feed and grow.

Here are some slow-growing plant species you can use:

Feeding Otos: “a Fat Oto is a Happy Oto”

You don’t want to confuse soft green algae with Green Spot Algae. GSA is extremely tough to remove and Otos won’t eat it.

– If you want to learn more about different types of algae, you can see a detailed guide here.

Now, this is important, and you should take note of this: Most aquariums with a stable ecosystem will not produce enough algae to sustain 6+ Otos.

Because of this, you need to provide some extra food. You can do this by feeding them algae wafers or Catfish pellets. 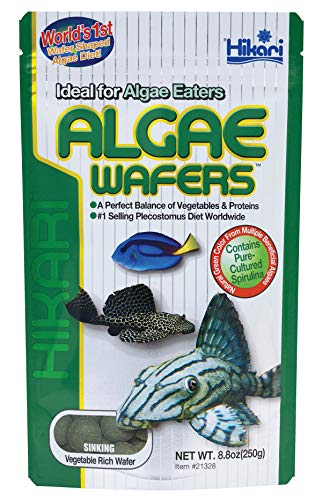 You can also supplement their diet with blanched vegetables:

When you’re feeding your Otos blanched vegetables, you’re going to need to weigh them down so it’ll stay in one spot long enough for them to reach it.

You can do this by using a Veggie-Clip, leftover plant weights, or attach it to a small rock using a rubber band.

As a general rule, don’t leave the vegetables in your aquarium for more than 3 days.

Pro Tip: Thoroughly wash the vegetables – make sure they’re free of pesticides before you introduce them to your aquarium.

It can be difficult to sex Otos because there’s no obvious distinction. But, if you look closely the females are slightly larger and wider than males.

And when it comes to in-tank breeding, it’s rare – but not impossible. If it happens, aquatic hobbyists don’t tend to notice until they’re greeted by their new friend in the tank.

If you’re one of the lucky ones who manage to witness the mating process, you’ll see the female swimming up and down plants, rocks, or the sides of your tank with males in hot pursuit (pun intended).

A lucky male will then get into a ‘T’ position with the female – causing her to release and hold her eggs with her ventral fins.

After the female has found a suitable surface to place the eggs, the male will fertilize them. The process is then repeated until the female’s done.

You can read a successful breeding story here.

Fact: Unlike other Loricariids, Otocinclus males do not guard their eggs.

A huge problem with keeping Otos is the first month of ownership. It’s common for hobbyists to report high loses in the first few weeks – even in ideal tank conditions.

So what’s going on? Well, there are a couple theories…

A lot of hobbyists in the community believe the trouble starts during their capture.

It’s believed that fishermen use chemicals like Cyanide to slow down or temporarily paralyze the Otos. They’re then easily able to gather large numbers of fish.

However, cyanide fishing is more common in reefs. And, I would like to point out I cannot seem to find any official online reports about fishermen using Cyanide or other chemicals to catch Otos – if you know of any, please share.

The stress put on fish during shipping can be handled by strong and healthy fish.

However, Otocinclus species are famous for being subjected to some awful shipping conditions.

Temperature swings, oxygen changes, irregular light cycles, dramatic movements, and vibrations can cause a number of diseases to infect the poor fish.

Starvation is a big problem because they’ll secrete the nitrogen in their food via their skin and gills as ammonia/ammonium – toxic to fish.

It’s not uncommon for them to be starved for 24-48 hours before the final bagging for shipping.

Having been used to an environment with plenty of algae and plants, they’re then starved and left in a bare tank – it’s no surprise there’s often many DOA’s (Dead on Arrival).

The fish then arrive in the fish store, where they’re commonly kept in overcrowded tanks with little algae to feed on.

If the pet store doesn’t provide them with algae wafers or vegetables they won’t last long.

It’s not a case of Otos being a fragile fish, it’s the fact they’re generally kept in harsh conditions before they’re bought.

But, it’s not all doom and gloom – you can use to following tips to buy healthy Otos.

How to Buy Healthy Otos?

To avoid the disappointment of losing your lovely Otos in the first few months, it’s important you pick the healthiest Otos from your fish store.

The following tips aren’t the ultimate answer, more a guide to give you and the Otos the best chance for success.

Speak to the Workers at Your Pet Store

Ask them the following questions:

How long they’ve had the stock for?

It’s common for Otos to die shortly after arriving at a pet store, so if they’ve had them for a few weeks it’s a good sign.

What are you feeding them?

If they say ‘Flake food’ – say no and leave. If they struggle to give you an answer – nope, this store is not for you.

Take a Close Look at Their Appearance

Easier said than done. Tank-bred Otos would be a better option, expect it’s extremely hard to source. If you know anyone – hook me up.

How to Introduce Your New Otos

After you’ve selected the best Otos available, it’s time to introduce them to your cycled aquarium (no measurable ammonia or nitrites and nitrates are below 20ppm).

You’ll also want some algae growth in your tank for when they arrive.

BUT, before you take them anywhere near your tank, you need to quarantine them for a few weeks.

This will help confirm your Otos are healthy and you’re not going to be introducing any nasty diseases into your aquarium.

Once you’re confident they’re in good condition, you can begin to introduce them to their new home.

I recommend using an acclimation kit and drip method. If you’re unfamiliar with the drip method. You can check out this article here.

Keep a close eye on them during the first month; making sure you keep on top of your 25-30% water changes.

If they survive, you’ve got a big chance they’ll be around for a long time – as long as you take care of them properly.

– Do you have your own Oto stories? Let us know in the comments.

How to Raise pH in Aquarium (The Safe Way)

Flame Moss Care: How To Plant, Grow, & Propagate In Aquarium